One of the improvements brought by the new Software EXScan HX_v1.3.0.2 resides in the "Cutting Plane" functionality in the "Scan - In Progress" step. There are two features that have been modified to improve the users´ experience as a whole, which are: 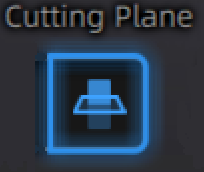 Compared to the circular plane generated in EXScan HX_v1.2.0.4, EXScan HX_v1.3.0.2 incorporates a rectangular plane, which makes it easier for the user to visualise the plane/surface to neglect (floor, wall, support, etc.). The image below shows visually the difference between the planes created by both versions of the software:

In this second video, on the other hand, the Cutting Plane´s worfklow in the new EXScan HX_v1.3.0.2 is shown. As you can see, the workflow is far more intuitive, as the Cutting Plane can be defined right after scanning the markers instead of havng to start scanning, pausing, defining it and restarting the scan again. This saves the user a step, making the process more efficient.

In conclusion, this new version of the software has improved the visualization of the Cutting Plane. Thus, the user can more easily define the floor, wall or face that the software should neglect. In addition, the plane´s definition stage has been moved one step forward in the task execution chain, thus eliminating one step and making the scanning process more efficient overall.